Not to be missed in France Sabine Weiss 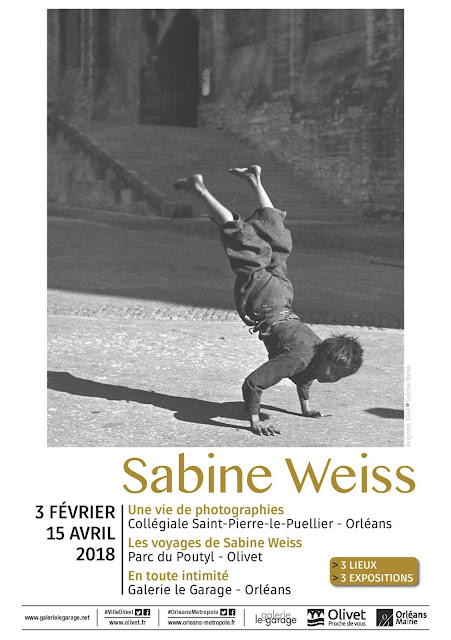 More information in French: HERE
Posted by All about photo at 6:31 AM 5 comments:

Motorcycles, women, music, night-life, drugs, life and death have always served as an inspiration to Alberto García- Alix. ‘Photographs of motorcycles, in particular, have become a focal point of his work and are part of his latest published book, entitled Moto. It covers a broad spectrum, from the first snapshots that he took in 1975, during a motocross race involving his brother, to 2007, incorporating a new block of unpublished photographs with which the artist initiated a renovated photographic discourse through a more abstract and allegorical use of images.
There is a radical transformation between his images of the 80s and 90s and those of the present. His earlier pictures comprise portraits and self-portraits of characters mounted on their machines in the midst of a number of circuits, festivals, streets and highways, introducing us into the world of motorcycling from within. In his more recent work, whole machines are never on view. More suggestively, he plays with their shadows and with the writhing effects of the light projected upon them. In short, this suite of photographs transmits the beauty and the care with which García-Alix has portrayed his life and its links to the motorcycle.’
Motorcycles and life; motorcycles and death. The motorbike is no longer an object and has become a character in itself, as important as those who ride them. It has its own life and soul; its soul is present in its shadow, with its blurred outline distorted by paving, pavement, and drains. The real object is transformed through the use of a fierce expressionism; allegory, feelings, state of mind; what is actually defined or present matters little. Motorcycles, like the buildings of Paris or China or the silhouettes of trees and railings express extreme solitude, forlornness; metaphors for abandonment or escape.
These photographs of a motorcycle-driven life have been interspersed with others, which are essential in the iconography of Alberto García-Alix and in the iconography of Spanish photography; his portraits and self-portraits, which he identifies as: ‘a confrontation in which he tends to place himself frontally, face-to-face with his model’, and which has resulted in timeless images which are now part of the rich history of photography. They represent reality from within – he has never been a peripheral artist – primarily of the movida madrileña, a countercultural movement which entailed a radical change in the culture of Spanish society during the transition to democracy and whose leading players were Pedro Almodóvar, Rossy de Palma, Emma Suárez, Alaska and many others, masterfully portrayed by the artist. But García-Alix never left it at that; rather, with the speed of a motorbike on a road without curves, he has established a fundamental distance from those photographs. His expertise continues today with his exposure of wonderfully dark characters with intense eyes, of nocturnal buildings, of vegetation which is alive and yet dead. Above all, his incredible, sincere and brutal introspection, delving into himself and his most intimate world; that is the true essence of García-Alix’s current work, his most disturbing findings.
Ricardo Ramón Jarne

Alberto García-Alix was born on 22 March 1956 in León, Spain. When he was eleven years old, he moved with his family to Madrid, where he currently resides. His earliest negatives date back to 1976. He held his first solo exhibitions in the early eighties, in galleries in Madrid such as the Buades Gallery or the Moriarty Gallery, and in international venues such as the Portfolio Gallery of London.
During the first PhotoEspaña show held in 1998, he presented a major retrospective exhibition, to huge critical and public acclaim. In 1999, he received the National Photography Award from the Spanish Ministry of Culture, and began working with the Juana de Aizpuru Gallery in Spain and the Kamel Mennour Gallery in France.
Between 2003 and 2006 he lived in Paris, where he produced a video trilogy alternating photographs and films, representing his venture into the video format, which he continues to explore to this day.
In 2009, he held a retrospective exhibition at the Reina Sofía National Museum Art Centre of Madrid, as well as at the Ullens Center for Contemporary Art of Beijing and at the Maison de la Photographie of Moscow. Recently, he has held exhibitions at the Maison Européene de la Photographie in Paris, at the Photographers’ Gallery in London, at the Contemporary Art Museum in León and at the Tabacalera Promoción del Arte in Madrid.
His work can be found in large international collections such as the Reina Sofía National Museum Art Centre (Spain), the Fonds Nationales d’Art Contemporain (France) or the Deutsche Börse (Germany), among others. García-Alix has combined his photographic activities with those of an editor; he founded the cultural journal, El Canto de la Tripulación (1989 to 1997), and, more recently, jointly founded the Cabeza de Chorlito publishing house, together with Frédérique Bangerter, under the imprint of which he has published some of his most recent creations: El paraíso de los creyentes (Believers’ Paradise) (2011); Diaporamas (2012); MOTO (2015) and Motorcycle Family Circus (2016).